Bob was one of the Guests of Honor for the 2005 World Fantasy Convention held in Madison, Wisconsin. Below are the front and back covers of the stunning program book produced by the convention and given away to everyone who belonged. 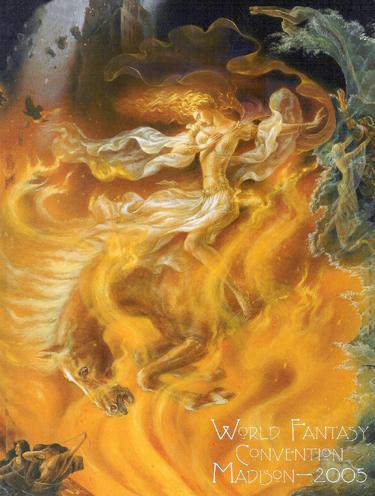 Both covers are by Kinuko Craft, who was Artist Guest of Honor for the show and are copyright © by her.

Below is a photo of Bob standing in front on the Margaret Brundage Weird Tales cover painting from September 1937 that he owns. 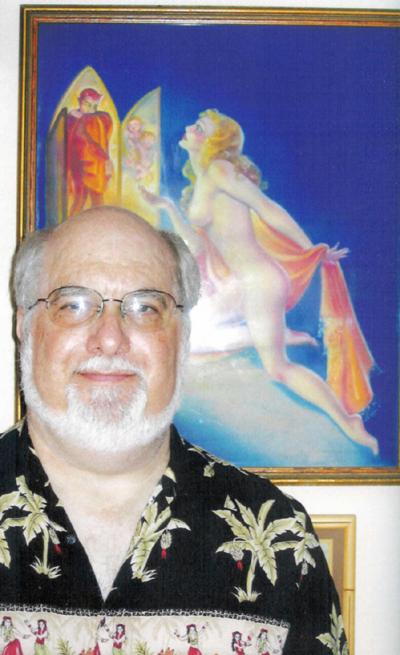 This photo was published in a tribute section
to Bob the 2005 program book, along with articles
by Phyllis (on living with Bob), Lois H. Gresh (on
collaborating with Bob), and Bob (about earlier World
Fantasy Conventions).

The article below about Bob was written by Phyllis and published in the 2005 World Fantasy Program Book.

Time and Again
By Phyllis Weinberg

It was the last week of July 1972. I was a music camp counselor for VanderCook College of Music's grade school band camp. We were using one of the dormitories on Illinois Institute of Technology's campus across the street from our small school. Toilet paper needed to be replaced in the community bathroom. I went is search of the Resident Advisor, Robert Weinberg. He was quite helpful producing the roll. I could not figure out how to put this roll on the institutional style dispenser. He said there was a button to release the spring. There was music in my ears when he said "BUDDON" with his New Jersey accent. It was the beginning of a beautiful week with me supposedly in charge of the well being of a hundred grade school kids on the loose for the first time in their lives. I went to Bob's room after getting the kids sequestered in their rooms for the evening. It was there that Bob introduced me to the wonders of …pulp magazines! When I saw the way he lovingly caressed the glossy cover of the odd sized magazine with the tanning newsprint-type paper, I knew that this was the man I wanted to care for me for the rest of my life.

My parents met Bob for the first time in early October. During a dinner of trout, Bob made the announcement that we wanted to get married. My father started choking! He claimed it was only a fish bone. Right!

We were married May 27, 1973. I still had two years of school left. Bob was working on his Ph.D. We moved some second-hand furniture, a new sofa bed, and black and white TV into a Mies Van der Roe shoe box sized apartment on campus complete with resident cockroaches and a strong smell of curry. (I got even with the neighbors when I accidentally melted a plastic spoon in a batch of anise candy.). Two book shelves were part of the living/dining room devoted to Bob's mail-order business selling fanzines. He also had an L.C. Smith typewriter in the corner where he produced WT50, his first publication, celebrating the fiftieth anniversary of Weird Tales, and later, Gangland's Doom, a history of the Shadow. We had a makeshift coffee table of cardboard boxes filled with pulp magazines that he bought for resale. He was also working with Ted Dikty of FAX publications, editing a book called Far Below. A Kelly Freas painting graced a wall and movie postcards were carpet-taped to other walls. (Bob has this thing about tape. You can never use too much tape on anything.).

With prosperity lurking in the mail-order book business and no job opportunities in the education field, we decided at the beginning of my senior year to quit college and move out to an apartment in the burbs. We expanded to six book shelves and monthly catalogs. Bob was involved with the Chicago Comic Cons now. Attending Pulp cons and SF cons were our vacations. Business was booming!

In 1976, we were able to put money down on a small house in Chicago. The business was moved to the attic and the basement. We became friends with the UPS men and the postmen. More conventions. Paintings and illustrations from pulps, digest magazines and paperbacks were finding their way into Bob's hands. Book and magazine collections were turning up. Bob's publishing adventures grew to include more pulp fanzines and Lost Classics, a series of books of forgotten stories reprinted from the pulps. Our business was also importing books from Britain and getting authors to autograph bookplates for their new books. Bob always found interesting items for our customers. We hosted a back yard barbecue honoring E. Hoffmann Price, a real Weird Tales author! We met Margaret Brundage, a Weird Tales artist at an art fair. Frank Robinson, famed SF author, visited and fondled Bob's mint condition pulps. And Bob, being the ultimate Weird Tales authority and collector, purchased the rights to the magazines from the previous publisher, Cylvia Margulies, in 1979.

We hardly felt like we were working. We woke when the mailman rang the bell in the morning and worked until midnight and then talked about business over cheese and crackers and Dr. Pepper until 1 a.m..

That all changed on October 26, 1979, when we welcomed an addition to our lives. Matthew was born in that small house with a doctor and midwife present. Now that was hard work. Bob was a great father, bouncing Matthew on his lap while wrapping packages, holding him on his shoulder while typing the catalog. I was really angry with the Pampers commercials with the sleeping babies. Our baby NEVER slept and always needed attention. We needed an employee, Nancy Ford, to help with the business now that the trials of motherhood had hit. The house grew even smaller suddenly and it was time to move.

June 1980 found us purchasing a 20 year old house at the highest interest rates in U.S. history. A modest tri-level with our "office" located in the front on ground level next to the garage was our new dwelling. I still do not know what a decent sized kitchen it, but this was an improvement over past places. Now there was room for more of Bob's collection.

Somehow Bob managed to carry on with business and find time to write The Weird Tales Story, The Readers Guide to Robert E. Howard's Swords-and-Sorcery, A Biographical Dictionary of SF and Fantasy Artists, and The Louis L'Amour Companion. Plus he edited over a hundred anthologies and collections. Every month he produced a 16 page catalog describing the newest books and fanzines, limited editions, and odd things like inflatable 6 foot tall Godzillas and Maltese Falcon reproductions. In his spare moments at the computer, he found the creativity and strength to write NOVELS!

Small Press Publishers were always calling Bob for his advice. He was a partner in running the Chicago Comicon and Dr. Who cons for decades and also was chairman of a few World Fantasy Cons in Chicago. He has influenced the field over the past 30 years in so many ways. Bob Weinberg is even credited for a few fan marriages.

We sold the book business in 1997 and no longer are involved in running conventions. Bob has devoted his time to writing. He has loved writing comic books. Lois H. Gresh has co-authored a number of books with Bob, the newest being The Science of James Bond. For three years he taught "Writing Thriller Fiction" at Columbia College in Chicago. On a hopeful note, maybe the many hours Bob has spent working on a TV or movie deal will finally become a reality.

Living with this man for 33-plus years, sharing our lives and our business and his zeal for collecting has been interesting and exciting, as well as challenging at times. Considering that we have worked together most of those years, I think we have accomplished a lot of equity in the "plus" department.

I cannot imagine how my life would have been without Bob. Jack Finney's novel, Time and Again, describes the chance meeting of two people and what might have happened if that meeting had not taken place. If Bob and I had not met in July 1972, would he have moved back to New Jersey and ended up in an engineering job or teaching mathematics? Would he have influenced the fields of science fiction, fantasy and pulp publishing, genre art, comics and fandom as a whole? Would I have ended up teaching beginning band in the middle of Nebraska? Time and again, I think of how things might have been, and thankfully how they really have unfolded. Bob, you have my love and admiration forever. I think that a lot of other people are glad to have been touched by our contributions time and again.