The Termination Node by Robert Weinberg and Lois H. Gresh


In 1994 and 1995, Bob bought a number of short stories for anthologies he was editing by Lois H. Gresh, a talented and imaginative science fiction and fantasy author. When Bob met Lois at a convention in 1995, he was fascinated to discover she had worked for years in the computer industry and had a true insider's knowledge of the field. Together, Bob and Lois came up with a proposal for a high-tech near-future computer thriller they called THE TERMINATION NODE. The proposal was bought by Del Rey books and was published in hardcover in January 1999 to terrific reviews. The novel was reprinted in November of the same year with hopes of capitalizing in on the worries about computer glitches associated with Y2K. A Japanese edition of the book was sold but neither Bob nor Lois have ever seen a copy of it. 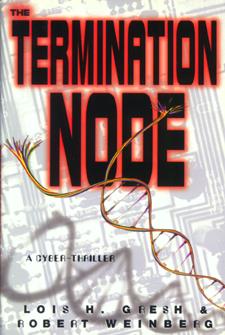 Twenty-something Judy Carmody is a total hacker, the best in the Internet security business. But even Judy has never seen anything like this - a cyber-heist that instantly vaporizes the assets of a major bank. Penetrating all state-of-the-art defenses in the dead of night, someone is using a mysterious new code to empty accounts, leaving no trail. 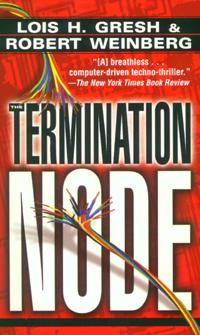 The masterminds have thought of everything- including the elimination of every hacker who might be able to stop them. As Judy desperately hurries to crack the deadly code, she discovers secrets that reach the highest levels of power - secrets that jeopardize the security and privacy of every citizen... 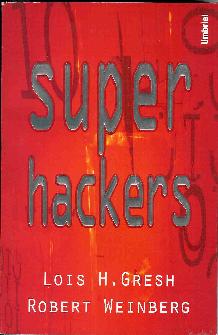 "One step removed from Tom Clancy, one step closer than William Gibson, THE TERMINATION NODE is a cyberthriller about reality just waiting to happen." -- Kevin J. Anderson


"Breathless net-scapade… A cautionary tale of computer hackers who are saving the next century from greedy, homicidal suits." -- Kirkus Reviews

SUPERHACKERS was the Spanish language edition of TERMINATION NODE. It was printed in Spain, but was distributed in all the Spanish-speaking countries of North, Central and South America as well.