The Science of Superheroes

On April 11, 2003, at the Rochester Chapter Award dinner for the Society of Technical Communications, THE SCIENCE OF SUPERHEROES by Lois H. Gresh and Robert Weinberg won two awards in the International-Level Competition sponsored each year by the Organization. The book received an award for "Distinguished International-Level Merit in Technical Communications" and also won the special "Best in Show 2003" award from the Rochester Chapter of the Organization. This is the first time ever that a book on pop-science and comic books has been so honored by this highly regarded professional association.

STC is the world's largest professional association for technical communicators. With more than 20,000 members across the globe, STC provides unparalleled opportunities for continuing education and peer networking. Members include every kind of technical communicator, including technical writers, editors, and illustrators as well as Web designers, technical translators, and managers and teachers of technical communication. They work in industries as diverse as computer software, medicine, aviation, manufacturing, and entertainment. STC has 150 local chapters on six continents-- anywhere people need technical information, STC members are there.

Ms. Gresh, a member of the Society's Rochester Chapter, attended the dinner and was caught completely by surprise by the double honor. In her short, impromptu, acceptance speech, she thanked the Society for the two Awards and promised to keep up the good work.

Now available in trade hardcover edition from John Wiley & Sons, is The Science of Superheroes written by Bob and Lois H. Gresh. For more than sixty years, comic book superheroes such as Superman, Batman, the X-Men, the Flash and Spider-man

have protected humanity from evil-doers while defending truth and justice. Now, Bob Weinberg and Lois Gresh have launched and amusing yet provocative investigation behind those superpowers in their book, The Science of Superheroes. Featuring an introduction by Dean Koontz, the book seeks to answer the question: science fiction or science fact.

Beginning with Superman, the first comic book super hero, the authors ask how can a building lifted by Superman remain in one piece? Could he actually travel faster than the speed of light? If Superman's strength is a result of the much stronger gravity on Krypton, exactly how big was Krypton? Filled with real scientific evidence, Gresh and Weinberg's findings will delight and amuse any superman fan. From there, they move onto other super characters including the Fantastic Four, the Incredible Hulk, Aquaman and the Sub-Mariner, Spiderman, the Green Lantern and many more. Concluding the book, Weinberg and Gresh ask several well-known comic writers their opinions on the science in comics.

Published at $24.95, The Science of Superheroes is available from John Wiley & Sons, Amazon.com, and bookstores throughout the United States, England, and Canada. Foreign rights have been sold in both Europe and Asia; the British Science Fiction Book Club plans to bring the book out in January. And, there's even talk of a possible movie or TV special sometime in the future.

"---the book should go down well with the comics' teenage readers: the writing is an accessible style and the authors skillfully manage the difficult gear-shift between describing the heroes and discussing the science." New Scientist, October 23-24

"Overall, the book has just the right tone -- straightforward, educational, but not too stuffy or serious. They aren't making fun of superheroes or poking holes in the stories, but using them as springboards to teach readers more about the principles behind the concepts. At the same time, they aren't bending over backwards to make the heroes "realistic" or believable; they understand that some things are done for the sake of interesting or exciting stories." Comics Worth Reading, Johanna Draper Carlson.

"I found this book to be a hoot from beginning to end. Ms. Gresh and Mr. Weinberg must have spent some time in institutions for the deranged, because well-balanced minds could not have conceived of this project. But thank God for their derangement, for they have produced a package of pure fun from first page to last. If, like me, you admire superheroes from a distance, or if you are a hardcore fan of them, you will enjoy this book as surely as you would enjoy waking one morning to discover that you are invincible, able to fly, and in possession of a totally cool costume behind which to hide your true identity." --Dean Koontz, from the Introduction

Here's how the advance publicity described this book:

"Exactly how powerful is the gravity on Krypton? Do mutants exist? If an ant's enlarged to the size of a human, could it push over skyscrapers? What is a gamma bomb?

If you've ever wondered about these and the many, many other questions raised by super hero comics, you're in luck. The answers are all included in the new book, The Science of Superheroes by Lois Gresh & Robert Weinberg, due from publisher John Wiley & Sons on September 13, 2002. This 224 page hardcover volume, which features a new introduction by best-selling author, Dean Koontz, will retail for $24.95 in the United States, $38.95 in Canada. The book takes a lighthearted but rigorous look at the science used in super hero and science fiction comic books, ranging from Superman to Spiderman to Strange Adventures."

The Science of Superheroes continues to sell well, in the USA, as well as overseas.

The Science of Supervillains


THE SCIENCE OF SUPERVILLAINS received a quarter-page
write-up in the February 8, 2005 issue of USA TODAY.

The Science of Supervillains is copyright © 2004
by Robert Weinberg and Lois Gresh.

The Science of Anime

The Science of James Bond

Everyone knows which secret agent drives a car that turns into a boat at the flick of a switch, leaves fake fingerprints and, of course drinks his martinis shaken, not stirred: Bond. James Bond. Gresh and Weinberg, having surveyed the science of supervillains and superheroes, turn to Bond and all the wonderful 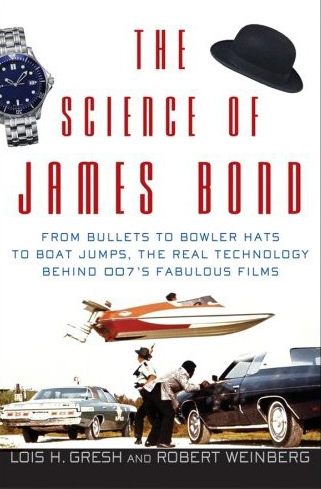 toys conjured up for him by Q, as well as the weapons created by his enemies. They explain how 'dirty bombs' work while noting that Goldfinger's plot to contaminate Fort Knox with one wouldn't work, because the radiation would turn gold into liquid mercury. Biological agents were also used by one of Bond's foes. Fortunately, Hugo Drax's Moonraker scheme to destroy humankind with a poison made from orchids was fairy tale stuff. Gresh and Weinberg's book goes up against last year's Death Rays, Jet Packs, Stunts & Supercars by Barry Parker, but they write better and their book is more accessible to Bond fans who've forgotten their high school science. Readers might check out the appendix on the Bond martini first, so they'll have something to sip while enjoying this lively read. (Sept.)

From the authors of The Science of Supervillains (2004) and The Science of Superheroes (2005) comes this lighthearted examination of the real-world truths behind the fantasy world of 007. Can a tossed bowler hat really decapitate a man? Can a car really fly, or turn into a submarine? Can a simple wristwatch do all the wondrous things Bond's watches have done over the years, from garroting people to detonating bombs to shooting out laser beams? The authors take none of this too seriously: the book is written in the spirit of the Bond films, with a wink and a nod. But there is a wealth of fascinating information here for fans of Fleming's superspy, and some readers might be surprised at just how many of the fictional gadgets were based on, or evolved into, real pieces of hardware.

The Science of James Bond has proven to be a tremendous hit and has been reprinted all over the world. There have been numerous reviews and articles written about the book and Lois and Bob have been interviewed by radio shows all across the United States and Europe.

Here are some of the covers of the more recent Bond reprints:

The Science of Stephen King

"What a treasure house is this book! Robots, space aliens, Einstein, black holes, time travel-- these themes, and much more, from Stephen King's amazing books are opened up like toy chests by Robert Weinberg and Lois Gresh. It's tremendous fun, entirely educational, and a great tribute to King."   --Peter Straub

"The Science of Stephen King appeals to both the scientist and the long-time reader of Stephen King in me. Weinberg and Gresh use concepts from King's fiction as launching pads for in-depth explorations of concepts as diverse

as ESP, pyrokinesis, time travel, artificial intelligence, quantum chemistry, alternate realities, string theory, and the possibility that we'll bevisited by aliens or that we'll face a global pandemic. Their broad knowledge of the history of science fiction also allows them to trace each of these concepts to their fictional origins in seminal stories and novels from the days of the pulps...and beyond. In a style reminiscent of science populists like Carl Sagan and Isaac Asimov, they present challenging concepts-- such as the possibility that the world we live in consists of nearly a dozen dimensions instead of just three-- in clear, easy-to-grasp language. They don't stretch beyond the limits ofcredibility-- if something is scientifically unlikely or patently impossible, they show why rather than hand-wave an explanation. If you've ever read Stephen King's works and asked yourself what's real and what could be real, you might be surprised by the answers Weinberg and Gresh provide. As they so cleverly explain, much of what Stephen King writes about in his novels is closer to reality than you might think."   --Bev Vincent, Ph.D., author of The Road to the Dark Tower

"Robert Weinberg and Lois Gresh's The Science of Stephen King is not only a superb overview of King's use in his stories of scientific concepts like ESP, aliens, time travel, artificial intelligence, parallel universes, and teleportation, it is also an excellent primer on everything from quantum physics and genetic engineering to nanotechnology and the scientific roots of obsession. Plus, it's written in a clear, entertaining, and understandable manner. And considering all the scary talk lately about pandemic flu, their chapter on The Stand is timely as hell."   --Stephen Spignesi, author of The Complete Stephen King Encyclopedia, The Lost Work of Stephen King, The Essential Stephen King

"Bob Weinberg and Lois Gresh have done it again-- made sense out of seeming chaos. A fun, fun read. Even if you don't like science, it's a great way to revisit all those beloved Stephen King novels of yore.'   --F. Paul Wilson

This is the first book to examine the science that wreaks havoc in many of Stephen King’s greatest works. It offers a fun, penetrating probe into psi powers, quantum chemistry, longevity and genetic research, biological warfare, and more. A must for his tens of millions of fans.

WHY DID IT HAVE TO BE SNAKES?
From the Science to the Supernatural,
the Many Mysteries of Indiana Jones

The Indy Book has done well all over the world. Here are covers for four different foreign editions: