Ever walk down the lonely dark streets of a big city late at night, and suddenly come across a club where the lights burn black and the crowd seems wild with a fever you can't understand? A place where they line up outside but no one wants to talk about what's inside? Ever wonder exactly who those people are, what secrets they hide behind their unreadable eyes and dark looks. Ever wonder about what takes place on the Nightside?

They call themselves the Others. No one knows much about them. Their history is as dark and murky as our own. It doesn`t matter. What matters is that they`re here. They look like us, they act like us, and most people never suspect they`re not one of us. But, they`re different. They`re not human.

The Others possess powers no mortal has, and oftentimes they're controlled by thirsts and passions and desires that are totally and absolutely alien. Some of them crave blood; others can change their shape; while still others can suck the soul right out of your body.

Over the centuries, mankind`s developed folklore and legends about the Others - given them names like vampire and werewolf and ghoul and ghast and demon. But, they`re not so easily categorized. Each of them is different, just as each human is unique and special in their own way.

Like humans, the Others prefer to socialize with their own kind. So they gather in clubs, in bars, in locations meant for them and no one else. Most of them sleep by day and party by night. They keep a low profile and hide in the darkest shadows. Our world of sunshine and faith and hope, they call `Dayside`. Their world, a place of shadows and darkness and terrors unseen, the world the Others call their own, they know as `Nightside`."

Sydney Taine, tall, beautiful, sensual, is a female detective who walks the Nightside. No one knows much about Taine other than she solves crimes that ordinary detectives can`t. The Others avoid the police and politicians at all cost. Taine's one of the few humans they trust, and some of them wonder about her. A few elders speculate behind locked doors that perhaps Taine belongs to a third species, a race called the Players. Could all life on Earth, both Humans and Others, be mere pawns in a vast game for unknown stakes played by a select few like Sydney Taine. When asked, she laughs and walks away. But Sydney never answers.

Above are the first two covers. Two more follow at the bottom of this page.
For a real treat, click on each image to see them full size!

The art for NIGHTSIDE is by Tom Derenick, who's already attracted a lot of attention for his work on CABLE and other Marvel Comics. Here's how Tom describes his unique style:

It's fully rendered tonal pencils (no inking) much like what we`ve seen through Avalon Studios and Jay Anacleto on Aria, only a bit more exaggerated and dynamic. I`m not as concerned with being completely photorealistic, although it will be much closer than my regular style. The interiors will be computer colored and we`re still deciding what we`re going to do with the cover, but hopefully it will be a step beyond what Marvel fans and most comic book fans are used to seeing. The first promo piece also has some photo manipulation mixed in as well, which is something [series editor] Mark Powers and I are looking into trying with the covers. Overall it should look very cool.

I developed the style while doing pinups online over two years ago. The response to it was tremendous and built me a fan base. Then I started working for Marvel. I did a pin-up for them in this style, but most of my work up to this point has been pen and ink comic book style, which I enjoy doing as well, however I was looking for an opportunity to use this style. Recently I visited the offices after showing the style to the EIC, Joe Quesada through e-mails. He liked it and sent the art around to the editors to see if anyone had something special to use it on. Mark was one of the guys that did. The tone and theme of Nightside is perfectly suited for this look, and after having worked with Bob in the past and reading what I could find of his Cable run as well as what I`ve seen so far of this title I think comic book fans are about to be in for the ride of their life, and I`m glad to be a part of it.

Above are the the covers for #3 and #4.
For a real treat, click on each image to see them full size! 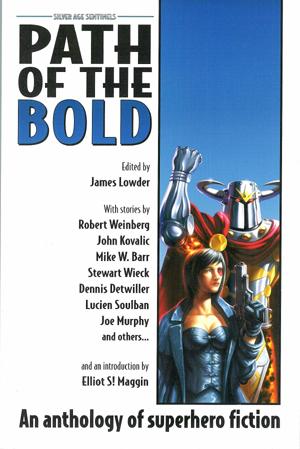 Sydney Taine, the enigmatic heroine of NIGHTSIDE, was scheduled to return in October 2002 in a second NIGHTSIDE mini-series from Marvel Comics. Unfortunately that series was cancelled shortly before publication. Instead, Bob continued Sydney's adventures in print as a series of short stories and novelets. The first story in this series was titled "Enter, the Eradicator!" and appeared in the trade paperbound anthology, Path of the Bold, published by Guardians of Order Press. The book was edited by James Lowder and is available in most bookstores, comic book stores, and game stores nationally. In the adventure, Sydney is transported to the world of the Silver Sentinels and must fight a monstrous foe known only as the Eradicator if she wants to return home to her dimension. This story contains a lot of information that would have been included in the second NIGHTSIDE comic book mini-series.

The second short story in the series was titled "Kiss Me Deadly" and appeared in the trade paperbound anthology, Astounding Hero Tales, published by Hero Games in 2007. In it, Sydney and Ape battle voodoo and drug-dealing in Harlem of the 1920's.

The third Taine story has Sydney journeying to a swords-and-sorcery world where she battles an evil cult for the soul of a young boy. Titled "CSI Kimmeria," the adventure is due to be published in summer 2009 in an anthology inspired by the works of Robert E. Howard.

And future Sydney adventures are in the works.

Cable and all other characters are
TM & © 2000, 2001 and 2002 Marvel Characters, Inc.
All rights reserved.
Want to read more about Cable and Nightside?
Go to Marvel.com!


Read Bob's article, How to Write Comics & Other Stuff.

Check out the Script for Cable #83.