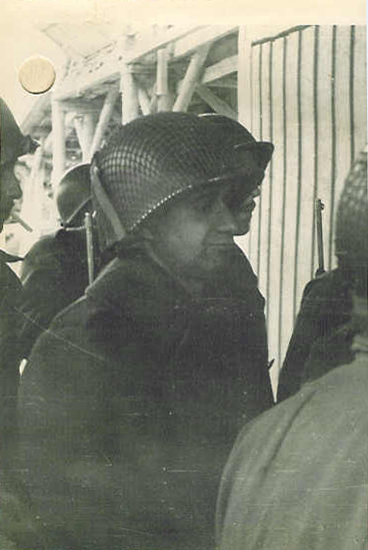 
I've written before about my father, David Weinberg, and his adventures in World War II. Most of my material for that article came from my relatives or from a few newspaper clippings and telegrams that my mother received during the years my father was overseas. My dad was a quiet, soft-spoken man who worked as a clerk in the Newark post office before the war. When the Japanese attacked Pearl Harbor, he was one of the first to enlist. After the war, my dad returned to Newark and again worked at the Newark Post Office. For several years he served as the president of the Jewish Civil Service Fellowship. He died in 1983, a few weeks before his 68th birthday.

My father rarely discussed his years in the service or the fighting in Europe. When he mentioned stuff, it was more the oddball disclosure that he first developed a taste for fried fish in England, where he ate fish and chips fairly frequently. Or how he was transported from the USA to England on the same boat that carried war correspondent, Ernest Hemmingway. That he could fall asleep in a minute, but awake instantly whenever anyone stepped too close, was another war-time trait. My dad never talked about the fighting or the violence he witnessed. He was a soldier in the invasion of North Africa, participated in the invasion of Sicily, and was a member of the first wave of attackers on Omaha Beach in Normandy on D-Day. It was there that he was wounded while scouting enemy machinegun nests behind Allied Lines and was later awarded a Bronze Star for his heroism and received a Purple Heart for his wound.

Later in the war, my father became a translator for the Allies. He had studied German in high school and his parents both spoke Yiddish, so he had a fairly good command of the German language. After the war ended, my dad waited patiently for a boat back to the states and my mother instead of going sight-seeing with his friends in Europe. It took him six months to get a ship home. He sent my mom a crystal tea set from Germany, but everything but one tea-cup was smashed in transit. My sister still owns it. My dad also brought home several swords and daggers that had belonged to Nazi soldiers he interrogated, but these got given away or donated to various causes over the years. I have none of them left. But there was something else.

There was one item I was told about by my mother and several of my relatives - unfortunately no longer with us - that fascinated me. The item in question that my father somehow was able to bring back to the USA was a huge Nazi flag that hung from the tallest building (possibly from a radio tower on top of that building) in some (German or Occupied) city. According to the story that I was told, the flag was so large that when my father and a bunch of acquaintances spread it out on the grounds of the local elementary school, the flag completely covered the playground. The school in question was the Peshine Avenue grade school in Newark, NJ, and by memory alone I seem to recall the playground was around 100x50 feet in size. So the flag was a huge one.

Now, my father died in 1983 and my mother no longer remembers the days after World War II. We did not keep the flag (I was not born until 1946) - or at least it was not around when I was growing up. What happened to it I do not know? I would guess it was donated to a museum or library. The few relatives I have contacted who were alive during those years don't remember anything about a flag or covering the playground with it. But I am convinced it happened. Who would make up such a story, or why?

I would like to verify this story. But, I have no idea how. I don't know where to look or who to ask. Suggestions are welcome. The Newark News, the one newspaper that most likely would have covered the event has been out of business for decades. The Star Ledger, Newark's only other paper, has records that only extend back to 1989. I'd like to prove this story really happened; or if it did not, disprove it once and for all. Where did this flag originally come from? How did it make it to the United States? Where is it now? To me, the story of the flag and my father is a living part of history. Any help you can provide would be greatly appreciated. Help me locate the missing flag and learn its history. I will post any and all leads and attempts to find the flag online. Somehow, I hope working together we can find it.