My Dad
by
Robert Weinberg


From time to time, I've been asked who was the most influential person in my life. The answer never varies. I've always been proud to answer, "my dad, David Weinberg." Of all the people I've known in my 60 years on Earth, I've never met a person I admired more and miss as much.

When my father retired from his job in the Post Office in 1971, my mother and his friends threw him a party which they called "This Is Your Life, David Weinberg." At the time, I was working on my Ph.D. in Chicago and was not able to get off teaching to fly back to New Jersey for the celebration. Here's what I sent to be read at the celebration:

It's been said that a man can be judged by who his friends are. With my father, the conclusion is simple. I have never met a person who knew him who did not consider my father his friend. I have never met a person who did not respect my father. I have never yet found a man who dislikes my father, and I doubt if I ever shall. My father has always been a man who has done his fair share and more without complaint. I have never heard him refuse a friend a favor, even if it meant some personal inconvenience. If he has any fault at all, it is that he does not think of himself as much as he does of others. Of all the men I have ever met, there is no man I respect, admire and love as much. If my friends consider me half the man my father is, I will consider myself a success in life.

My father, Dave Weinberg, was born in Newark, NJ in 1915, the son of Sam and Rebecca Weinberg. His mother died when he was seven years old and he was raised, along with four cousins, by his Aunt Minnie and Uncle Sam. He attended Charlton Street School and Irvington High School, where he was an excellent student. As a student there, he won an award for his reading of "If" by Rudyard Kipling at a school talent show. My father loved poetry as well as good books and "If" was his favorite poem. It is my favorite as well.

What better philosophy in life can anyone have than "If you can fill the unforgiving minute with sixty seconds' worth of distance run?" All my life, that has been my greatest ambition and most sought-after goal. To my mind, it's a perfect line of poetry.

My dad graduated high school in the middle of the worst part of the Depression, and though he wanted to attend college, could not. Instead, he applied for a job as a milk truck deliveryman, though he did not know how to drive a truck (or a car for that matter). Taken out by the regular driver to memorize his route, my father watched how the man drove and taught himself how to work a stick-shift in one afternoon. He got the job. Several years later, he went to work for the Newark Post Office and rose to the rank of Supervisor for a branch office in what was, at the time, the second largest post office operation in the United States.


My father met my mother, Dorothy, in 1940, and they were married in October 1941, just a few months before war was declared. After the Japanese attack on Pearl Harbor, my father was one of the first to enlist. At 5 feet 8 inches tall and 140 pounds after a big meal, he was not what you would call a big man. But what he lacked in size, he made up in spirit. He soon rose to the rank of Private First Class and was awarded a sharpshooter's medal. He belonged to the Fighting First Infantry Division and was shipped overseas in early 1942. He sailed on the same boat that Ernest Hemingway traveled to Europe as a war correspondent.

The First Division served in the deserts of North Africa, then in the mountains of Sicily. My father was wounded in North Africa and was awarded his first Purple Heart Medal. He returned to the fighting after only a few days recovery, and participated in the invasion of Sicily. After fighting in Italy, the First Division was part of the invasion of Normandy at D-Day. My father was in the first wave of soldiers to hit the shore at Omaha Beach (see "Saving Private Ryan" for what it was like!). On that day, he was wounded while scouting behind German lines, for which he was awarded a Bronze Star and a second Purple Heart.

David Weinberg, Private First Class, 16th Infantry. For heroic achievement in connection with military operations against the enemy in the vicinity of Colleville-sur-Mer, Normandy, France, 6 June 1944. Despite heavy artillery, mortar and machine-gun fire, Private Weinberg fearlessly reconnoitered enemy installations and secured tactical information of great value to his battalion commander. Private Weinberg's courage and initiative contributed immeasurably to the success of the invasion.

Later on, my father was a member of the infantry unit that conducted the first Jewish Religious Service from Nazi Germany. This service took place on Sunday, October 29, 1944, and was broadcast on the National Broadcast Company radio station at 9:30 a.m. in Aachen, Germany. It was

broadcast outside, with the sounds of artillery guns in the air. The service was conducted by Chaplain Sidney Lefkowitz of Richmond, Virginia, and a choir of fifty American soldiers of the Jewish faith, including my father.

As I'm not a military historian, nor an expert on World War II, I don't know if there is a great deal of information about this event, or none at all. All I do know is that this was an important moment in Jewish history, if not in U.S. history, and I'm very proud that my father was part of it.

To quote from Rabbi Lefkowitz's service: "This is not merely a Jewish religious service, however important that in itself is. It is far more than that. It is a proclamation that the days of darkness are passing, that the bastions from which they have moved forward into the malice have been besieged and soon will be destroyed, that worship of God is again restored in part of this world, although it had been proscribed.

"May it please God's will that the time is near when tyranny shall be entirely routed, that his children everywhere, in truth and in peace, may service Him."

My dad returned home from the war in late 1945. I was born August 29, 1946, one of the early members of the Baby Boomers generation. Though my father served his country heroically, he never once talked about the war. He worked hard in the Post Office and as a part-time accountant for the rest of his life. He was a good husband to my mother, Dorothy, and a fine father for me, and my sister, Susan. His health was never the best and he suffered a series of heart attacks that forced him to retire early. In his later years, he and my mother went on a number of cruises and traveled to several foreign countries. My dad loved to read. He was a science fiction fan and Jack Williamson was his favorite author. He died in 1983, only a few weeks before his 68th birthday. Over the years, I miss him still. He was one of those people who Dan Rather called "the greatest generation." 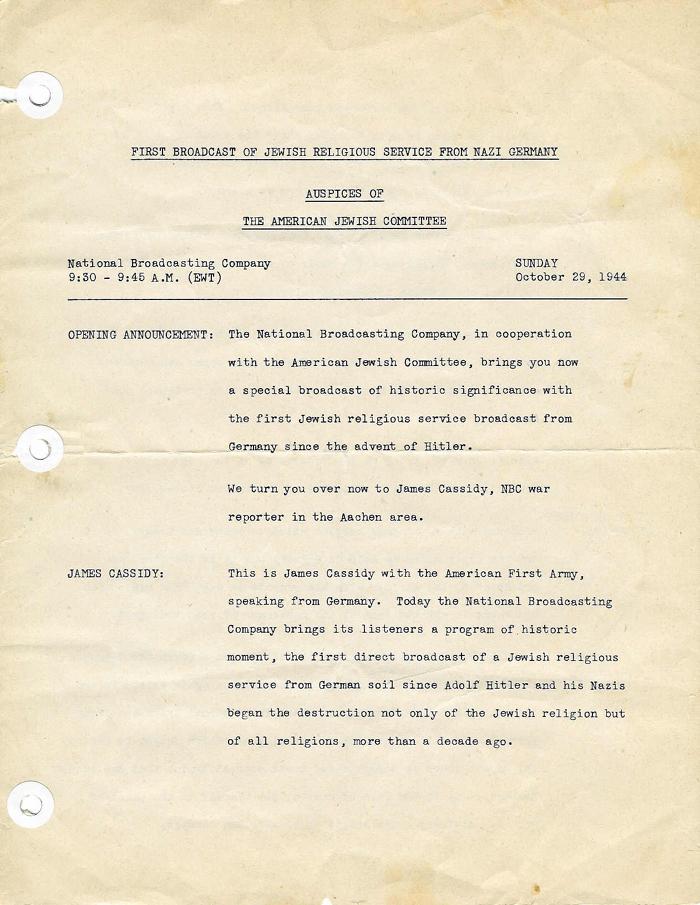 Rabbi Sidney Lefkowitz conducts the first Jewish service
in Nazi Germany on October 29, 1944, a Sunday, at
9:30 a.m in Aachen, Germany. 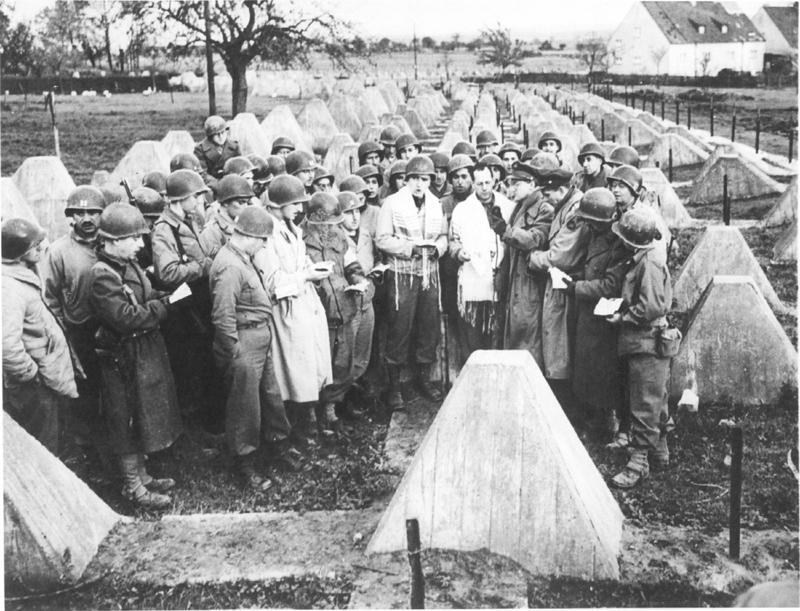