Chambara is the name given to Japanese action films dealing with the Feudal era of Japan. The word Chambara is slang for Japanese swordplay or swashbuckler films. Chambara films have been popular since the beginning of the film industry in Japan.

The first Chambara film was "The Fight at Hono Temple" which was released in 1908. The director, Makino Shozo, became known as the father of Japanese cinema. Inspired by Hollywood westerns, Japanese director Akira Kurosawa made some of the most memorable Chambara films of all time. These include "Seven Samurai" which was later remade in America as "The Magnificent Seven," and "Yojimbo," which was remade as "A Fistful of Dollars." The popular manga series, "Lone Wolf and Cub," was made into six highly regarded Chambara epics.

During the early 1970's, Francis Parker School in Chicago ran a series of Chambara films every weekend. Bob attended these shows with friends form Illinois Institute of Technology where he was teaching at the time. Even though the films were shown without subtitles, he was captivated by the fast action and tremendous swordplay. With the huge growth of the video tape field in the 1980's, Bob was finally able to obtain many of his favorite Chambara movies, complete with sub-titles! Now, Chambara has made the jump to DVD. Many Chambara films featured continued characters. Listed below are examples of two of Bob's favorite series. He's always interested in hearing from fellow Chambara fans.

Zatoichi is the name of a blind swordsman who wanders through 18th century Japan. Ichi is a blind masseur and professional gambler who wanders throughout Japan. He carries his sword inside the cane he uses to tap his way along the streets and forest paths of the country. Because of his gambling, Zatoichi is considered a gangster and often associates with the gang lords who are powerful bosses of most small towns. These gang lords are sometimes friendly to Ichi and sometimes not. Ichi is the champion of the ordinary men and women of the towns and his sense of morals and justice often puts him in conflict with the gang lords and the nobles of the area. But none of them are a match for this blind swordsman who uses his sense of hearing to detect the slightest movement of his foes.

in one particularly famous scene at the beginning of a Zatoichi film, he is trying to sleep in an inn but is bothered by a fly that keeps on buzzing around his face. Finally, tired of the insect's constant noise, Zatoichi pulls his sword, cuts the fly in half, and returns the sword to its cane sheath, all in the matter of seconds! There are more than 25 Zatoichi films starring the great Shintaro Katsu, and there was even a TV series featuring his adventures. Some of the best films include: 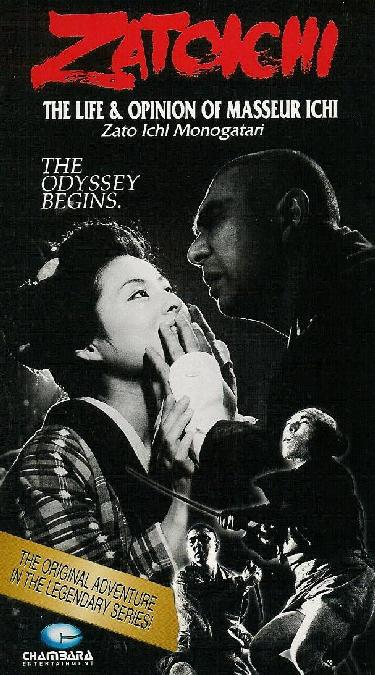 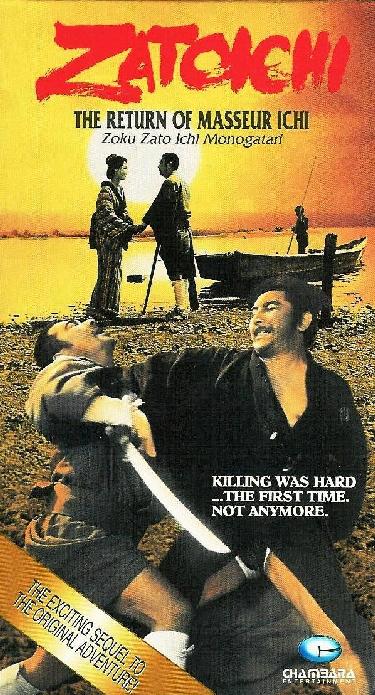 THE RETURN OF MASSEUR ICHI
The second film in the series 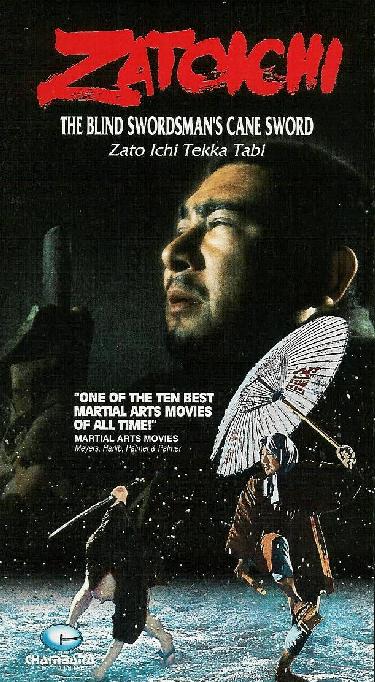 THE BLIND SWORDSMAN'S CANE SWORD
Considered one of the ten best martial arts movies ever made. 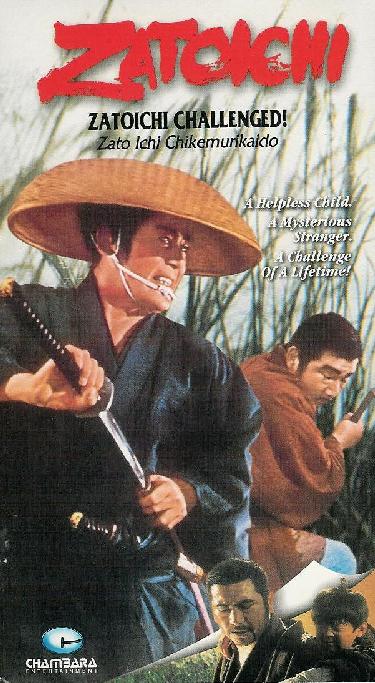 ZATOICHI CHALLENGED
A helpless child, a mysterious stranger, the challenge of a lifetime! 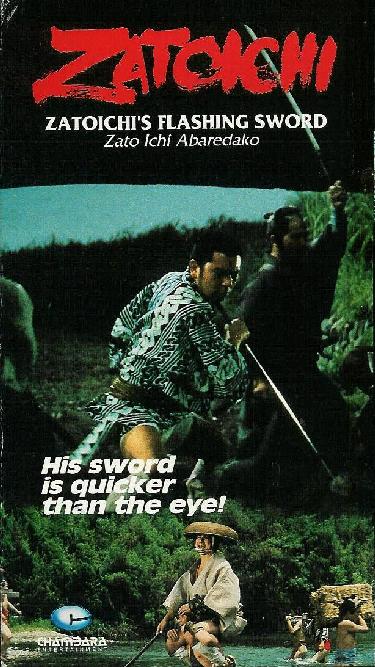 ZATOICHI'S FLASHING SWORD
A battle between rival Yakuza bosses with
Zatoichi in the middle. His sword is
quicker than the eye!

Another great Chambara series is "Sleepy Eyes of Death," the adventures of Nemuri Kyoshiro, son of the Black Mass. His mother Japanese, his father a foreign priest who abandoned his mother, Kyoshiro is a man with no past and desire for no future. He is a ronin, a masterless Samurai, and he is the master of the deadliest samurai fighting technique known, the Full Circle Cut. Starring Ichikawa Raizo as Nemuri Kyoshiro. Among the most stylish and exciting Samurai movies ever made. These are some of the best films in the series. 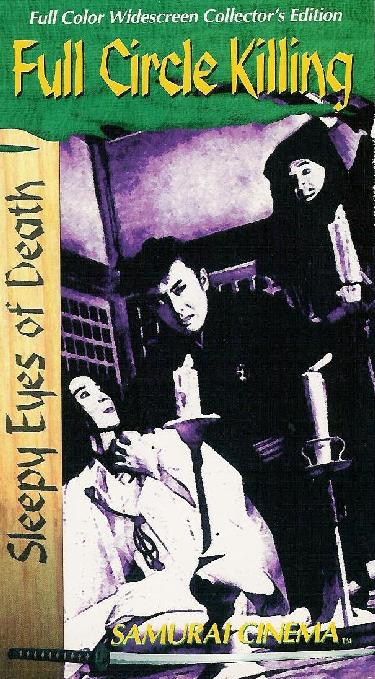 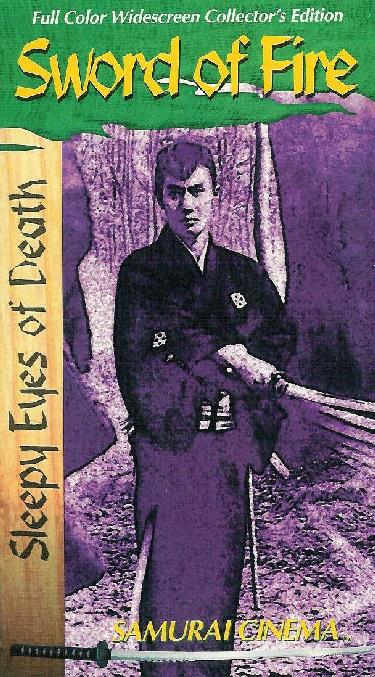 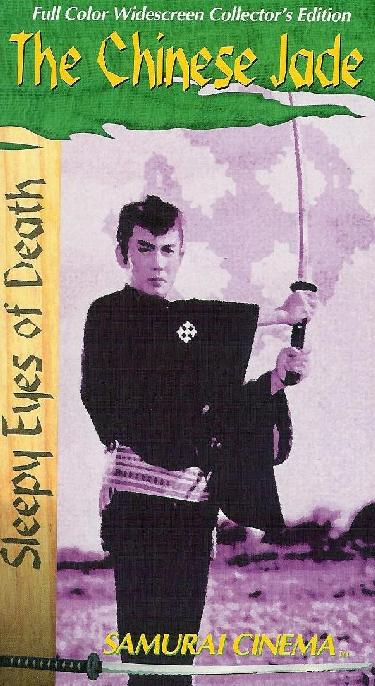 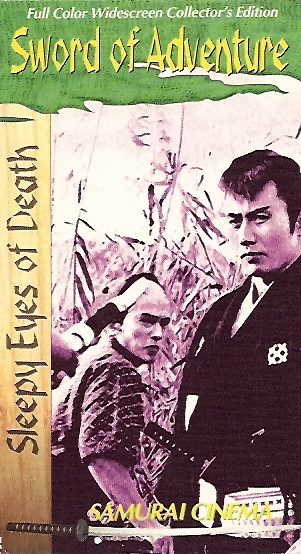 More adventures of Nemuri Kyoshiro, "Son of the Black Mask," Sword of Adventure. Kyoshiro befriends an old man who turns out to be the Finance Commissioner for the Shogunate. The old man has to solve the Shogunate's financial problems without overburdening the common people with new taxes. His efforts make an enemy of the Shogun's daughter, who hires assassins to kill the old man. But they didn't count on Nemuri Kyoshiro, the master of the "Full Moon Cut." 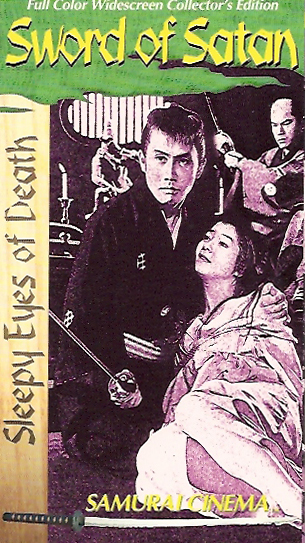 Sword of Satan. The Lord of a mighty Clan fathers an illegitimate son, and he will go to any lengths to prevent anyone learning the truth. A faithful servant, who saved the child from certain death, appeals to Kyoshiro Nemuri for help. When he refuses, she kills herself. To regain his lost honor, the master of the Full Moon Cut must face the might of an entire Clan of samurai. 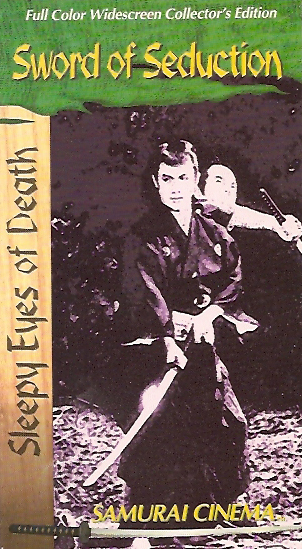 Sword of Seduction. A mad princess weaves a web of treachery and deceit to ensnare Kyoshiro Nemuri in a deadly game of cat and mouse. Only Kyoshiro's incredible skills with his deadly sword can save him from sure death. 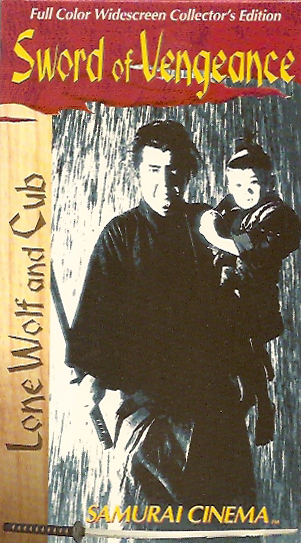 Perhaps the most famous of all Chambara epics are the six movies that make up the Lone Wolf and Cub series. These stories were originally done in comic book form (manga) written by Kazuo Koike and drawn by artist, Goseki Kojima. The story was the basis of six films starring Tomisaburo Wakayama, as well as four plays, a TV series, and more.

When the series was originally published in Japan in 1970, it sold over 8 million copies. The manga spanned 28 volumes, each over 300 pages, for a total of over 8,700 pages telling the story.

The first three films, directed by Kenji Misumi, were released in 1972. They were produced by Shintaro Katsu, the brother of Tomisaburo Wakayama who starred in the series. Katsu was already famous as the star of the Zatoichi series.

Lone Wolf and Cub told the story of the Shogun's finest executioner, Ogami Itto. Disgraced by false accusations raised by the Yagyu Clan, who wanted control of the Shogunate, Itto was forced to become an assassin. Along with his three-year-old son, Daigoro, Itto seeks revenge against the Yagyu clan. Itto and his son become known as "Lone Wolf and Cub."

Sword of Vengeance - the first adventure of Lone Wolf and Cub. Ogami Itto is falsely accused of treason. He is dismissed as Royal Executioner and his wife is murdered by assassins. He puts his baby son on the floor and gives the child a choice - a red ball or a sword. If the child choses the red ball, Itto will know the boy is meant to join his mother in death. If he choses the sword, the boy will accompany his father on his mission of vengeance. The boy choses the sword and the adventures of Lone Wolf and Cub begin. 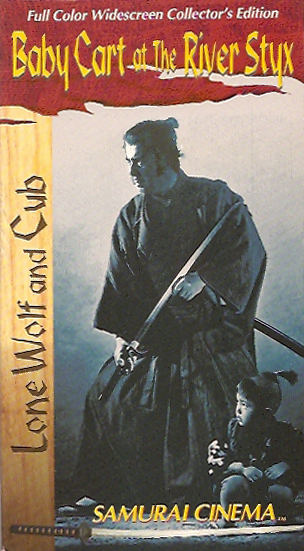 Baby Cart on the River Styx. The second Lone Wolf and Cub adventure. Retsudo, the mastermind of the Yagyu clan, sends the deadly female Akashi Yagyu Minjas after Ogami Itto. But no warrior can defeat Lone Wolf and Cub. 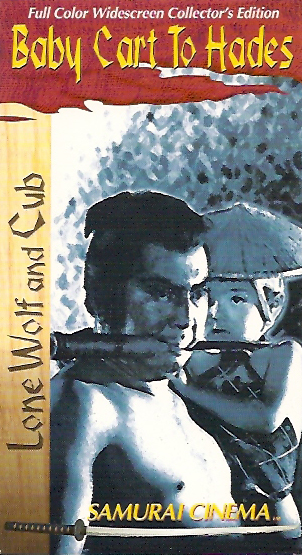 Baby Cart to Hades. Once he agrees to kill, nothing can stand in his way! 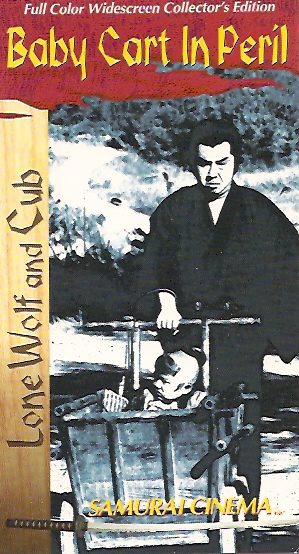 Baby Cart in Peril. Again, he kills everything! 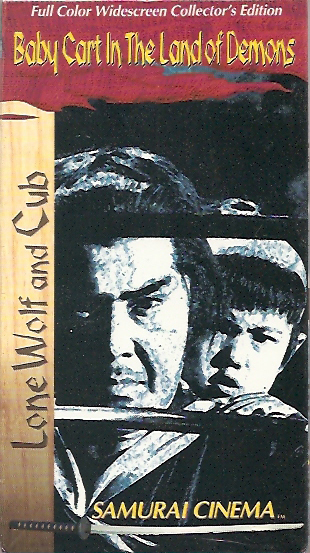 Baby Cart in the Land of Demons. And the killing continues! 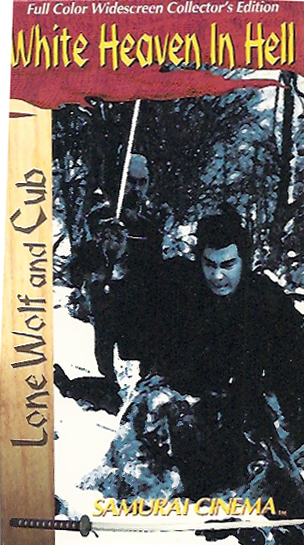 White Heaven in Hell. The final film of the series.