Captain Future was a pulp hero invented by Mort Weisinger when he was an editor at Standard Magazines (Thrilling Wonder Stories, Startling Stories, etc.) in 1939, shortly before attending the first World SF Convention in New York City. Weisinger realized that most science fiction fans at the time were teenage boys, so he came up with the idea of an SF magazine aimed at teens, with an outer-space hero. He announced the title, "Captain Future," at the convention, saying that he was inspired by the seriousness of the fans in attendence. Correspondence with Edmond Hamilton shows that Weisinger had already been planning the magazine months before the convention ever took place.

Edmond Hamilton took Weisinger's so-so idea about "Mr. Future" and turned the concept into "Captain Future." Captain Future, Curt Newton, was a typical super-science pulp hero, with a trio of unusual companions: Grag, a seven foot tall robot; Otho, a green-skinned android; and Simon Wright, a human brain living in a box. Together, these heroes were known as the "Futuremen," and had adventures throughout our solar system, and several times, outside the solar system.

Every issue of Captain Future magazine featured a full-length novel by Edmond Hamilton about Captain Future and his aides. Romance was hinted at between Curt and the beautiful Joan Randall, but nothing very explicit ever took place (remember, this was 1940's stuff aimed at teens!). Along with the novel, there was always a feature "The Worlds of Tomorrow" which included a map of the planet or moon where the action took place. Other features that ran from time to time included a column on "The Future Men" and a coming next month featurette.

When Ed Hamilton was drafted, the novels for Captain Future were written by "Brett Sterling," a house name used by Standard Publications. Two novels under the Sterling name, "Days of Creation" and "Worlds to Come" were the work of Joseph Samachson. Ed Hamilton wrote three of the novels that appeared under the Sterling name, "The Star of Dread, Magic Moon," and "Red Sun of Danger."

When Captain Future folded in 1944, the series was popular enough that several novels were published in Startling Stories. These included "Red Sun of Danger" by Hamilton, "Outlaw World" by Hamilton, and "The Solar Invasion" by Manly Wade Wellman.

In 1950, Edmond Hamilton brought Captain Future back for a series of novelettes that ran in Startling Stories. These were "The Return of Captain Future," "Children of the Sun," "The Harpers of Titan," and "Pardon My Iron Nerves."

In 1951, Hamilton contributed three more stories to the series. "Moon of the Unforgotten, Earthman No More," and "Birthplace of Creation." All of these stories took a somewhat more realistic approach to the lives of the Futuremen, though "Pardon My Iron Nerves" was a fairly humorous story about Grag the robot.

Click on any cover below to see a larger version of it.

One of the most enjoyable aspects of the Captain Future pulp was the feature that ran in every issue, The Worlds of Captain Future. This short (2-3 pages) article described the planet where most of the action of the issue's novel took place along with featuring a map of the main locations in the story. While Captain Future was obviously not aimed at the somewhat more sophisticated adult science fiction reader, the stories were always fun and the features in the rear of the magazine were great! Here are five of the maps from the early issues of Captain Future.

"Meet the Future Men" was an irregular column that ran in the back pages of Captain Future. It gave some background on the heroes of the magazine, and helped explain their unique powers for readers who were just catching up on the series. These columns were written by Edmond Hamilton and allowed him to flesh out his rather sketchy descriptions of the lead characters in the novels.

Grag the robot and Otho the synthetic man had a friendly rivalry in the stories. Grag was big and strong and not very bright, while Otho was quick-witted and a master of disguise. Later on, they even got somewhat annoying pets, another standard in pulp storytelling.

Reprinted here are the original columns describing these two Futuremen, Grag and Otho, along with the pictures of each of them that ran with every novel. 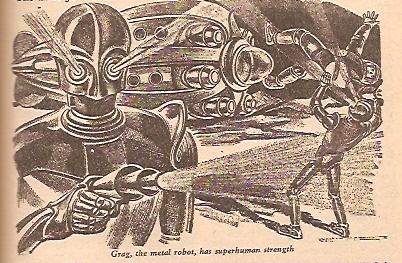